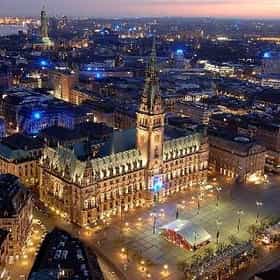 Hamburg, officially Freie und Hansestadt Hamburg, is the second largest city in Germany and the ninth largest city in the European Union. It is also the thirteenth largest German state. Its population is over 1.8 million people, and the Hamburg Metropolitan Region has more than 5 million inhabitants. The port of Hamburg, on the river Elbe, is the second largest port in Europe and tenth largest worldwide. The official name reflects its history as a member of the medieval Hanseatic League, as a free imperial city of the Holy Roman Empire, a city-state, and one of the 16 states of Germany. Before the 1871 Unification of Germany, it was a fully sovereign state. Prior to the constitutional ... more on Wikipedia

Hamburg is ranked on...

#57 of 80 Cities With the Best Sports Fans 37.7k VOTES The cities with the best sports fans are the locations across the United States that are packed full of loyal sports fans re...
#30 of 118 The Most Beautiful Cities in Europe 43.7k VOTES List of the most beautiful cities in Europe, as ranked by Europeans and world travelers from all over the globe. When any wa...
#84 of 96 Cities That Should Have a Baseball Team 39.2k VOTES Cities that should have a baseball team include the large metropolitan areas in the United States and Canada that are curren...
#20 of 53 The Best European Cities for Backpacking 3.6k VOTES Backpacking through Europe is a right of passage--and an adventure--that many young adults embark upon. When you're backpa...
Gay Events & Pride Parades Around the World 17.5k VIEWS Here is a list of gay pride parades and gay events celebrated around the world. The LGBT Community in each city plans and pu...
Public Transportation Maps From Around The World 2.9k VIEWS If you've ever used public transit, then you've likely encountered public transit maps, some of the most colorful and engagi...