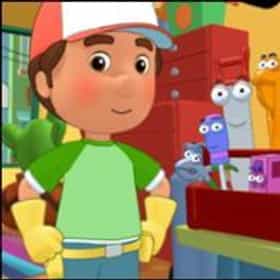 Handy Manny is ranked on...

#349 of 487 The Greatest Animated Series Ever Made 620.2k VOTES The top animated series of all time include some of the best TV shows ever to flicker in your living room (or on your comput...
#8 of 24 People who voted for Handy Manny... also upvote Harry Potter Franchise on The Most Rewatchable Movies also upvote Harry Potter Franchise on The Best Film Adaptations of Young Adult Novels The Best Current Disney Junior Shows 11.2k VOTES A list of the best current Disney Junior shows, ranked by fans. Disney Channel's popular children's programming block featur...
#248 of 290 The Most Overrated TV Shows Of All Time 541.7k VOTES List of the most overrated TV shows of all time, ranked by fans, critics, and people like you. Ever since the dawn of the ...
#100 of 187 The Best TV Shows You Can Watch On Disney+ 12.9k VOTES Launched in the fall of 2019, Disney+ offered new shows based on Disney, Marvel, and Star Wars properties alongside old favo...
#175 of 238 The Greatest Cartoon Theme Songs of All Time 160.3k VOTES For entire generations of kids, some of their most fond memories are of watching Saturday morning cartoons. The animated sho...
#10 of 35 Good TV Shows for Babies 1.2k VOTES Although many parents limit screen time for children under a certain age, many also choose fun and educational shows for the...
#26 of 27 Good Educational Shows for Toddlers 221 VOTES Whether or not toddlers are given a limit on screentime, many parents primarily choose educational shows for toddlers as wha...
#5 of 12 The Best Bilingual Shows For Kids 138 VOTES Other than from being a great place to waste a whole day by binge-watching a series that features adults playing teenag...
#5 of 11 The Best Edutainment TV Shows 57 VOTES The very best edutainment shows on television, ranked from best to worst. This list of the greatest edutainment shows also i...