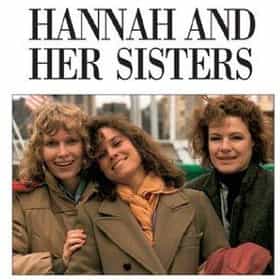 Hannah and Her Sisters is a 1986 American comedy-drama film which tells the intertwined stories of an extended family over two years that begins and ends with a family Thanksgiving dinner. The film was written and directed by Woody Allen, who stars along with Mia Farrow as Hannah, Michael Caine as her husband, and Barbara Hershey and Dianne Wiest as her sisters. The film's ensemble cast also includes Carrie Fisher, Farrow's mother Maureen O'Sullivan, Lloyd Nolan, Max von Sydow, and Julie Kavner. Daniel Stern, Richard Jenkins, Fred Melamed, Lewis Black, Joanna Gleason, John Turturro, and Julia Louis-Dreyfus all have minor roles, as do Tony Roberts and Sam Waterston, who have uncredited ... more on Wikipedia

Hannah and Her Sisters is ranked on...

Hannah and Her Sisters is also found on...