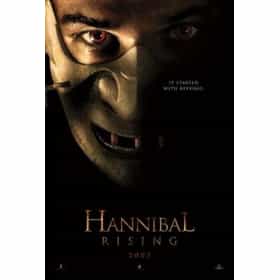 Hannibal Rising is a 2007 horror film and the fifth film of the Hannibal Lecter franchise. It is a prequel to the previous three films: Red Dragon, The Silence of the Lambs, and Hannibal. The film is an adaptation of Thomas Harris' 2006 novel of the same name. French actor Gaspard Ulliel portrays Lecter. Anthony Hopkins played the role in three previous films, and Brian Cox portrayed him in Manhunter. Hannibal Rising was directed by Peter Webber from a screenplay by Harris, and was filmed in Barrandov Studios in Prague. ... more on Wikipedia

Hannibal Rising is ranked on...

Hannibal Rising is also found on...