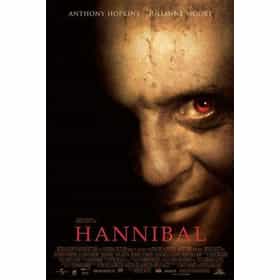 Hannibal is a 2001 American thriller film directed by Ridley Scott, adapted from the novel of the same name by Thomas Harris. It is the sequel to the 1991 Academy Award-winning film The Silence of the Lambs in which Anthony Hopkins returns to his role as Hannibal Lecter. Julianne Moore co-stars, in the role first held by Jodie Foster as the U.S. Federal Bureau of Investigation, Agent Clarice Starling. Set ten years after The Silence of the Lambs, Hannibal follows Starling's attempts to apprehend Lecter before his surviving victim, Mason Verger, captures him. It is set in Italy and the United States. ... more on Wikipedia

Hannibal is ranked on...

Hannibal is also found on...