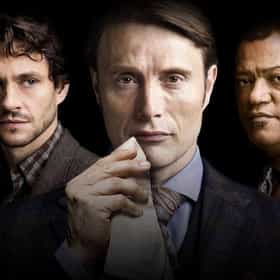 Hannibal is an American psychological thriller–horror television series developed by Bryan Fuller for NBC. The series is based on characters and elements appearing in the novel Red Dragon by Thomas Harris and focuses on the budding relationship between FBI special investigator Will Graham and Dr. Hannibal Lecter, a forensic psychiatrist destined to become Graham's most cunning enemy. The series received a 13-episode order for its first season and, unlike most U.S. network shows, all future seasons will feature 13 episodes. David Slade executive produced and directed the first episode. The series premiered on NBC on April 4, 2013. On May 9, 2014, NBC renewed Hannibal for a third season, ... more on Wikipedia

The Most Appetizing Meals From ‘Hannibal’ You Might Actually Try 139 votes For three mouthwatering years, Bryan Fuller’s Hannibal was a feast for the senses. The strength of its expressionistic appro...
Every Food-Related Pun From ‘Hannibal’ 304 votes Dr. Hannibal Lecter is known for his renowned psychiatry practice, his elaborate dinner parties, and his affinity for long p...
The Best Episodes of Hannibal 287 votes There are so many good episodes of Hannibal, but which ones really stand out? Do you like "Mizumono" the best, or ...

Hannibal is ranked on...