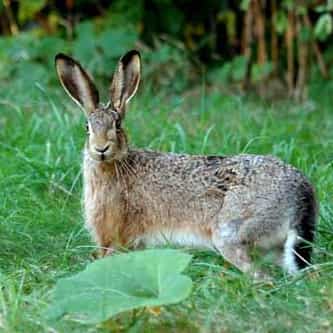 Hares and jackrabbits are leporids belonging to the genus Lepus. Hares are classified in the same family as rabbits. They are similar in size and form to rabbits and have similar herbivorous diets, but generally have longer ears and live solitarily or in pairs. Also unlike rabbits, their young are able to fend for themselves shortly after birth rather than emerging blind and helpless. Most are fast runners. Hare species are native to Africa, Eurasia, North America, and the Japanese ... more on Wikipedia

Hare IS LISTED ON

#44 of 91
25k VOTES The Best of Awwducational: Fun Facts About Adorable Animals
28.8k VIEWS The Fastest Animals in the World