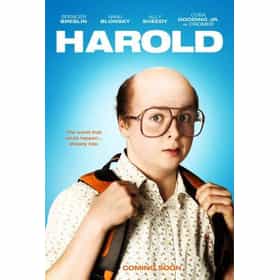 Harold is a 2008 American comedy film co-written by Greg Fields and T. Sean Shannon, starring Spencer Breslin, Cuba Gooding Jr., Nikki Blonsky, Ally Sheedy and Stella Maeve. The film is T. Sean Shannon's first full-length feature and is partially adapted from his earlier short film, which itself was adapted from one of his Saturday Night Live sketches. It was also released six years after the death of Greg Fields. Harold was filmed in August 2007 in and around Great Neck, Long Island, New York, and had a limited release on July 11, 2008 in Los Angeles, Miami, and New York City. ... more on Wikipedia

Harold is ranked on...

Harold is also found on...