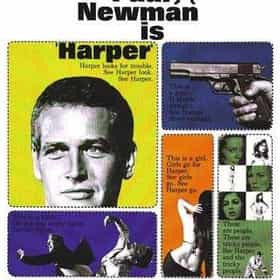 Harper, released in the UK as The Moving Target, is a 1966 film based on Ross Macdonald's novel The Moving Target and adapted for the screen by novelist William Goldman, who admired MacDonald's writings. The film stars Paul Newman as the eponymous Lew Harper. Goldman received a 1967 Edgar Award for Best Motion Picture Screenplay. The film pays homage to the Humphrey Bogart Sam Spade and other detective films by featuring Bogart's wife, Lauren Bacall, who plays a wounded wife searching for her missing husband, a role similar to General Sternwood in the 1946 Bogart-and-Bacall film, The Big Sleep. In 1975, Newman reprised the role in The Drowning Pool. ... more on Wikipedia

Harper is ranked on...

Harper is also found on...