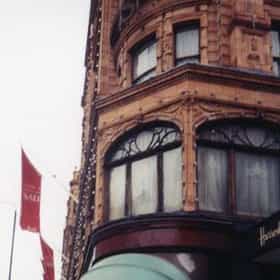 Harrods is an upmarket department store located on Brompton Road in Knightsbridge, in the Royal Borough of Kensington and Chelsea, London. The Harrods brand also applies to other enterprises undertaken by the Harrods group of companies including Harrods Bank, Harrods Estates, Harrods Aviation and Air Harrods, and to Harrods Buenos Aires, sold by Harrods in 1922 and closed as of 2011, with plans announced to reopen in 2013. The store occupies a 5-acre site and has over one million square feet of selling space in over 330 departments making it the biggest department store in Europe. The Harrods motto is Omnia Omnibus Ubique—All Things for All People, Everywhere. Several of its ... more on Wikipedia

Harrods is ranked on...

Harrods is also found on...