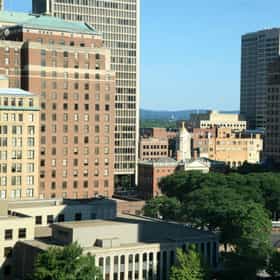 Hartford is the capital of Connecticut and the historic seat of Hartford County until Connecticut disbanded county government in 1960. As of the 2010 Census, Hartford's population was 124,775, making it Connecticut's fourth-largest city after the coastal cities of Bridgeport, New Haven, and Stamford. Nicknamed the "Insurance Capital of the World", Hartford houses many insurance company headquarters, and insurance remains the region's major industry. Almost 400 years old, Hartford is among the oldest cities in the United States. Hartford is home to the nation's oldest public art museum, the Wadsworth Atheneum; the oldest public park, Bushnell Park; the oldest continuously ... more on Wikipedia

Hartford is ranked on...

Hartford is also found on...