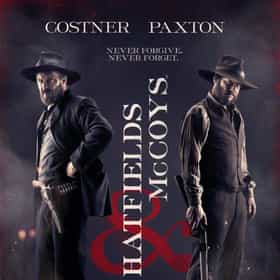 It’s the true American story of a legendary family feud—one that spanned decades and nearly launched a war between Kentucky and West Virginia. Hatfields & McCoys, a three-part miniseries, showcases an all-star cast led by Kevin Costner and Bill Paxton. It chronicles a clash of clans that inspired passion, vengeance, courage, sacrifice, crimes and accusations, while forever transforming the two families and the region they lived in. The Hatfield-McCoy saga begins with Devil Anse Hatfield (Costner) and Randall McCoy (Paxton). Close friends and comrades until near the end of the Civil War, they return to their neighboring homes—Hatfield in West Virginia, McCoy just across the Tug ... more on Wikipedia

The 12 Most Brutally Insane Moments of the Hatfield-McCoy Feud 21.8k views The war between the Hatfields and McCoys is one of the most brutal family feuds in American history, distinguished by its ab...

Hatfields & McCoys is ranked on...

#358 of 779 The Best TV Shows to Binge Watch 1.2M VOTES Bored? Not anymore! These are the best TV shows for binge-watching. The greatest television shows in the world are ranked he...
#23 of 44 What to Watch If You Love 'Vikings' 349 VOTES Wondering what to watch after Vikings? If the epic fantasy historical fiction series has you hungry for more swords, axes, a...
#27 of 116 The Best Historical Drama TV Shows 59.4k VOTES Learn about real-world history while you binge watch the best historical drama shows on television. Some of the greatest TV ...
#37 of 179 The Best Miniseries in TV History 23.2k VOTES The very best miniseries shows on television, ranked from best to worst. This list of the greatest miniseries shows also i...
#11 of 96 The Best Miniseries Of The 2010s 1.5k VOTES The 2010s wasn't the decade that started the limited series - but it was definitely the decade that perfected it. The b...
#18 of 51 The Best Kevin Costner Movies 18.9k VOTES This list of the best Kevin Costner movies is ranked best to worst and includes movie trailers when available. Kevin Costner...
#8 of 44 The Best Recent Western TV Shows & Movies 1.8k VOTES While the Western genre isn't as well represented in either film or television as it was back in the mid-20th century, ...

Hatfields & McCoys is also found on...