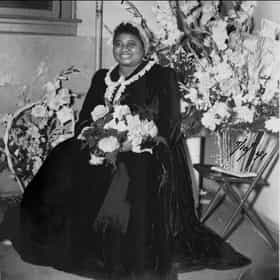 Hattie McDaniel (June 10, 1893 – October 26, 1952) was an American stage actress, professional singer-songwriter, and comedian. She is best known for her role as "Mammy" in Gone with the Wind (1939), for which she won the Academy Award for Best Supporting Actress, the first Academy Award won by an African American entertainer. In addition to acting in many films, McDaniel recorded 16 blues sides between 1926–1929 (10 were issued), was a radio performer and television star; she was the first black woman to sing on radio in the United States. She appeared in over 300 films, although she received screen credits for only 83.McDaniel has two stars on the Hollywood Walk of Fame in ... more on Wikipedia

Hattie McDaniel is ranked on...

#639 of 2,003 The Greatest Actors & Actresses in Entertainment History 1.7M VOTES The best actors and actresses of all time, male and female, ranked by film fans worldwide. This list of greatest actors and ...
#52 of 60 The Greatest Non-White Actresses 9.5k VOTES In 1939, Hattie McDaniel became the first African-American to win an Academy Award. She was recognized for her work in Gone ...
#2 of 29 The Most Memorable Oscar Moments of All Time 4.6k VOTES The Academy Awards are cinema’s most prestigious prize. Although there are moments of humor, the ceremony is typically a but...
#23 of 103 The Best Musical Artists From Kansas 831 VOTES Here are the best artists and bands from Kansas. Often regarded as the heartland of America, it is easy to see why so many h...
The Locations of All Hollywood Walk of Fame Stars 419.2k VIEWS A list of stars on the Hollywood Walk of Fame, with photos. This list includes all television and movie stars. Acquiring a s...
Famous Firsts By Black And African Americans 25.7k VIEWS African Americans have been breaking the color barrier for centuries. Black history is full of incredible people who accompl...

Hattie McDaniel is also found on...