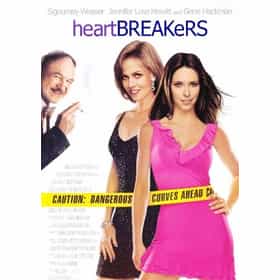 Heartbreakers is a 2001 caper-romantic comedy film directed by David Mirkin. It stars Sigourney Weaver, Jennifer Love Hewitt, Ray Liotta, Jason Lee, and Gene Hackman. Weaver was nominated for a Golden Satellite Award for her performance in the film. The plot revolves around an elaborate con set up by a mother-daughter team to swindle wealthy men out of their money, and what happens during their "last" con together. This film is written by Robert Dunn, Paul Guay and Stephen Mazur. It was the third collaboration by Guay and Mazur, whose previous comedies were The Little Rascals and Liar Liar. ... more on Wikipedia

Heartbreakers is ranked on...

Heartbreakers is also found on...