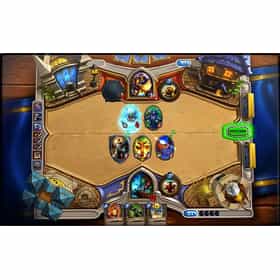 Hearthstone: Heroes of Warcraft is a digital collectible card game developed by Blizzard Entertainment. It is free-to-play with unlimited paid content, and limited free content. Announced at the Penny Arcade Expo in March 2013, the game was released on March 11, 2014. Hearthstone is available on Microsoft Windows and OS X systems and on Windows 8, iOS and Android touchscreen devices. New content for the game involves the addition of new card sets and gameplay, such as from the Goblins vs. Gnomes expansion pack and the Blackrock Mountain adventure. By September 2014, there were more than 20 million registered Hearthstone accounts and by January 2015, there were more than 25 million ... more on Wikipedia

Hearthstone: Heroes of Warcraft is ranked on...

#96 of 186 The Most Popular Video Games Right Now 1.3M VOTES Gamers everywhere, we're ranking the most popular games in 2020. How popular will they be compared to anticipated 2020 video...
#136 of 155 The Best Video Games Of The 2010s, Ranked 101.5k VOTES With so many awesome titles and ground-breaking releases, it’s definitely been a good decade for gamers. While it might be h...
#534 of 1,581 The 100+ Best Video Games of All Time, Ranked by Fans 991k VOTES These are the greatest games of all time, as voted on and reranked by gamers like yourself. Video games are more popular tha...
#24 of 123 The Best Games To Play Online 77.5k VOTES For many of us, there is no greater joy than putting on our headset, meeting in a lobby with friends, and gaming for hours o...
#22 of 52 The Best Games to Stream on Twitch 13.2k VOTES Thanks to popular streamers on Twitch, streaming gameplay, or watching the streams of others, has enjoyed a boom over t...
#19 of 49 The Most Addictive iPhone Games That You Can't Put Down 4.1k VOTES Addicting iPhone games are distractions that you simply can’t put down. They consume your waking hours (maybe even your drea...
#13 of 26 The Best Free To Play Games In 2019 2.3k VOTES Are you a gamer on a budget? Well, we're here to help. From mobile games to AAA multiplayer experiences, we're ranking the t...
#24 of 44 The Best Free to Play MMORPG Games of All Time 3.2k VOTES For those who don't want to pay a subscription fee to game online, we've created a ranked list of the best free to play MMOR...
#15 of 28 The Best Blizzard Entertainment Games List 5.9k VOTES List of the best Blizzard Entertainment games with images, including any well-known Blizzard Entertainment made games for an...