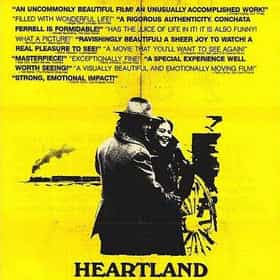 Heartland is a 1979 American film, directed by Richard Pearce, starring Rip Torn and Conchata Ferrell. The film is a stark depiction of early homestead life in the American West. It is based on a memoir by Elinore Pruitt Stewart, titled Letters of a Woman Homesteader. Set in southwestern Wyoming, where Stewart homesteaded, the movie was filmed in central Montana. In 1980 the film was featured as a "Buried Treasure" on an episode of the TV show, Sneak Previews, produced and hosted by the film critics Roger Ebert and Gene Siskel. ... more on Wikipedia

Heartland is ranked on...

Heartland is also found on...