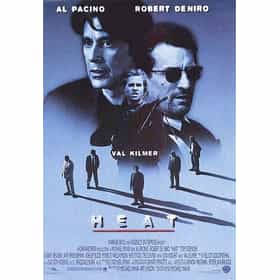 Heat is a 1995 American crime thriller film written, produced and directed by Michael Mann, and starring Robert De Niro, Al Pacino, and Val Kilmer. The film was released in the United States on December 15, 1995. De Niro plays Neil McCauley, a professional thief, while Pacino plays Lt. Vincent Hanna, a veteran L.A.P.D. robbery-homicide detective tracking down McCauley's crew. The central conflict is based on the experiences of former Chicago police officer Chuck Adamson and his pursuit in the 1960s of a criminal named McCauley, after whom De Niro's character is named. Heat was a commercial success, grossing $67 million in the United States and $187 million worldwide against a $60 ... more on Wikipedia

Heat is ranked on...

Heat is also found on...