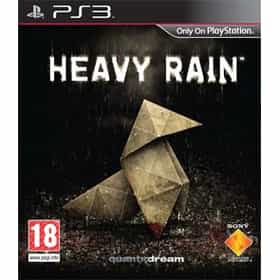 Heavy Rain is an interactive drama action-adventure video game developed by Quantic Dream and published by Sony Computer Entertainment exclusively for the PlayStation 3 in February 2010. The game is a film noir thriller, featuring four diverse protagonists involved with the mystery of the Origami Killer, a serial killer who uses extended periods of rainfall to drown his victims. The player interacts with the game by performing actions highlighted on screen related to motions on the controller, and in some cases, performing a series of quick time events during fast-paced action sequences. The player's decisions and actions during the game will affect the narrative. The main characters ... more on Wikipedia

Heavy Rain is ranked on...

Heavy Rain is also found on...