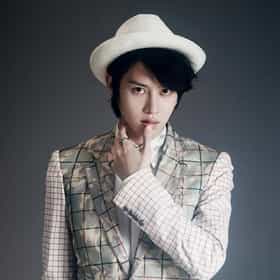 Kim Hee-chul (born July 10, 1983), better known by the mononym Heechul, is a South Korean singer, songwriter and presenter. He is a member of South Korean boy group Super Junior and has further participated in its subgroup, Super Junior-T as well as project group Universe Cowards with Min Kyung-hoon. He is also a former member of Kim Heechul & Kim Jungmo.Prior to his debut in Super Junior, Heechul began his acting career in 2005, starring in the second season of teen drama Sharp 2. Subsequently, this led him to host his first music show Show! Music Tank, appear on advertisements, and host radio shows. However, on 2006, just a year after his Super Junior debut, Heechul was involved ... more on Wikipedia

Kim Heechul is ranked on...

#37 of 167 The Best K-pop Dancers of All Time 1.7M VOTES If you can't dance, you can't be a K-pop star, baby! K-pop lovers know that this genre is all about the presentation....
#37 of 147 The Hottest Guys in K-pop 503k VOTES K-pop fans, it's time to vote for the hottest guys in Kpop! Featuring the best looking Kpop idols, cutest maknaes, and the s...
#41 of 74 Rappers Who Put on the Greatest Live Shows, Ranked 29.6k VOTES Sounding good on stage is one thing, but putting on the greatest live show is another—and there's quite a few rappers w...
#13 of 27 The Worst Dressed Kpop Idols 25.6k VOTES Celebrities are scrutinized every time they are seen in public. What they wear, where they go, who they're with - it is the ...
#5 of 20 Kpop Idols Who Have Starred in Musicals 41.7k VOTES Kpop idols are known for their showmanship on Music Bank, Core Music, M! Countdown, etc., etc. Most think that they only loo...
#4 of 11 The Best Member of Super Junior 6.9k VOTES If you are at all familiar with Kpop, you have watched and/or heard at least one Super Junior song. As one of the first grou...
#57 of 81 The Best Male Rappers In K-pop Right Now 59.2k VOTES Looking for boy group members with the hottest bars? Here are the best male idol rappers in Kpop right now, ranked by fans e...
#25 of 273 The Best Dance-pop Artists 22.5k VOTES Dance-pop artists list, with photos, ranked best to worst by votes. List of good dance-pop bands includes a filter so you ca...
#6 of 11 Who Is Your Favorite Super Junior Member? 27.7k VOTES Every K-pop fan knows who their favorite Super Junior member is, but who is the best member of Super Junior? The 11 mem...

Kim Heechul is also found on...