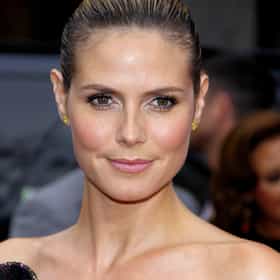 Heidi Klum (German pronunciation: [ˈhaɪ̯diː ˈklʊm]; born 1 June 1973) is a German model, television personality, businesswoman, fashion designer, singer, television producer, author, and actress. She appeared on the cover of the Sports Illustrated Swimsuit Issue and in 1999 was the first German model to become a Victoria's Secret Angel. Following a successful modeling career, Klum became the host and a judge of Germany's Next Topmodel and the reality show Project Runway, which earned her an Emmy nomination in 2008 and a win in 2013 for Outstanding Host for a Reality or Reality-Competition Program (shared with co-host Tim Gunn); Klum has been nominated for six Emmy Awards. She has ... more on Wikipedia

Heidi Klum is ranked on...

Heidi Klum is also found on...