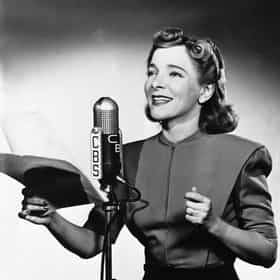 Helen Hayes MacArthur (née Brown; October 10, 1900 – March 17, 1993) was an American actress whose career spanned 80 years. She eventually received the nickname "First Lady of American Theatre" and was one of 15 people who have won an Emmy, a Grammy, an Oscar, and a Tony Award (an EGOT). Hayes also received the Presidential Medal of Freedom, America's highest civilian honor, from President Ronald Reagan in 1986. In 1988, she was awarded the National Medal of Arts. The annual Helen Hayes Awards, which have recognized excellence in professional theatre in greater Washington, DC, since 1984, are her namesake. In 1955, the former Fulton Theatre on 46th Street in New York ... more on Wikipedia

Helen Hayes is ranked on...

#475 of 926 People We Wish Were Still Alive 3.3M VOTES RIP to our world's greatest achievers, those who changed the way we live and the ways we thought. This list of people we wis...
#118 of 122 People who voted for Helen Hayes... People in the South are 2x more likely to vote for this The Worst Oscar-Winning Actors Ever 236.1k VOTES Bad actors who have won Oscars, in any category, as determined by the votes and selections of Ranker users. This list contai...
#27 of 232 People who voted for Helen Hayes... also upvote X-Men Franchise on The Best Superhero Movies Ever Made also upvote James Bond Franchise on Every James Bond Movie, Ranked Best to Worst The Greatest American Actresses Of All Time 182.3k VOTES It takes a lot to make a movie great. There has to be excellent writing, production, direction, editing, and of course, acti...
#44 of 76 People who voted for Helen Hayes... also upvote Star Wars Franchise on The Best Movies of All Time The Best Actresses to Ever Win Oscars for Best Actress 71.2k VOTES Every year the Academy evaluates a year's worth of brilliant performances and picks what they believe to be the best of the ...
#541 of 2,003 The Greatest Actors & Actresses in Entertainment History 1.7M VOTES The best actors and actresses of all time, male and female, ranked by film fans worldwide. This list of greatest actors and ...
#23 of 24 All Triple Crown Of Acting Winners, Ranked 292 VOTES Triple Crown of Acting winners are more common than EGOT winners, but the achievement is no less spectacular. Actors who hav...
#37 of 42 The Best Oscar Hosts Ever 16.7k VOTES Who are the best Oscar hosts of alltime? This is a list of Academy Awards emcees, with photos, voted on by Oscar fans worldw...
#12 of 21 People Who Have EGOT Awards 5.4k VOTES It’s an achievement very few people have managed: snagging the coveted EGOT. Also known as an Emmy, a Grammy, an Oscar, and ...
Here's a List of Every Known Republican Celebrity 1.8M VIEWS Conservative celebrities - this list of Republican celebrities has over 400 celebrities who are Republicans. What celebritie...
All Oscar Hosts 374.2k VIEWS This list includes all Oscar hosts ever. Since the Academy Awards ceremonies began in 1929, 73 different people have ho...

Helen Hayes is also found on...