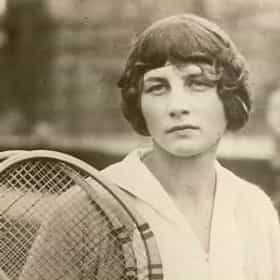 Helen Newington Wills (October 6, 1905 – January 1, 1998), also known as Helen Wills Moody and Helen Wills Roark, was an American tennis player. She became famous around the world for holding the top position in women's tennis for a total of nine years: 1927–33, 1935 and 1938. She won 31 Grand Slam tournament titles (singles, women's doubles, and mixed doubles) during her career, including 19 singles titles. Wills was the first American woman athlete to become a global celebrity, making friends with royalty and film stars despite her preference for staying out of the limelight. She was admired for her graceful physique and for her fluid motion. She was part of a new tennis fashion, ... more on Wikipedia

Helen Wills Moody is ranked on...