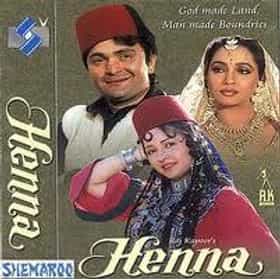 Heena is the name of a 1991 Bollywood film produced and directed by Randhir Kapoor and starring his brother Rishi Kapoor, Ashwini Bhave and Zeba Bakhtiyar also renowned as Neha Seti. It was shot in Kashmir. This film's project was planned and started by legendary director Raj Kapoor but due to his demise during the filming stage, the remaining portions were directed by his son Randhir Kapoor. Hence, this film is considered as the last film of Raj Kapoor. The film was an Indo-Pak project, hence the dialogues of the film were written by the Pakistani legendary writer Haseena Moin on Raj Kapoor's personal request. The film was a critical and a commercial success and was also India's ... more on Wikipedia

Henna is ranked on...

Henna is also found on...