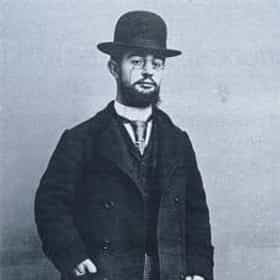 Henri Marie Raymond de Toulouse-Lautrec-Monfa (24 November 1864 – 9 September 1901), also known as Henri de Toulouse-Lautrec (French: [ɑ̃ʁi də tuluz lotʁɛk]), was a French painter, printmaker, draughtsman, caricaturist, and illustrator whose immersion in the colourful and theatrical life of Paris in the late 19th century allowed him to produce a collection of enticing, elegant, and provocative images of the modern, sometimes decadent, affairs of those times. Toulouse-Lautrec is among the best-known painters of the Post-Impressionist period, with Paul Cézanne, Vincent van Gogh, and Paul Gauguin. In a 2005 auction at Christie's auction house, La Blanchisseuse, his early painting ... more on Wikipedia

Henri de Toulouse-Lautrec is ranked on...

12 Historical Figures You Didn't Know Had STDs 850k VIEWS A lot of historical figures have been accused of having STDs. Before doctors could properly diagnose a disease like syphilis...
#2 of 48 People who voted for Henri de Toulouse-Lautrec... are 20x more likely to vote for Gustav Klimt on this list Famous Art Nouveau Artists 2.1k VOTES List of famous Art Nouveau artists, with images, bios, and information about their notable works. All the greatest artists...
Every Person Who Has Been Immortalized in a Google Doodle 57.4k VIEWS Who are the most influential people in history? Here's a good place to start. This is a list of every person who has ev...

Famous People Who Died in France Famous Artists from France