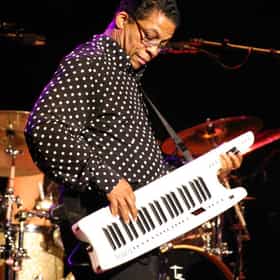 Herbert Jeffrey Hancock (born April 12, 1940) is an American pianist, keyboardist, bandleader, composer and actor. Hancock started his career with Donald Byrd. He shortly thereafter joined the Miles Davis Quintet, where he helped to redefine the role of a jazz rhythm section and was one of the primary architects of the post-bop sound. In the 1970s, Hancock experimented with jazz fusion, funk, and electro styles. Hancock's best-known compositions include "Cantaloupe Island", "Watermelon Man" (later performed by dozens of musicians, including bandleader Mongo Santamaría), "Maiden Voyage", "Chameleon", and the singles "I Thought It Was ... more on Wikipedia

Herbie Hancock is ranked on...

#638 of 2,219 People who voted for Herbie Hancock... also upvote James Bond Franchise on Every James Bond Movie, Ranked Best to Worst The Best Rock Bands of All Time 3.2M VOTES There are thousands of rock bands that have existed throughout the decades ever since the dawn of rock and roll, but only th...
#43 of 69 The Greatest Flautists of All Time 2.2k VOTES The flute is a very popular member of the woodwind family. Unlike other woodwind instruments that have a reed on the mouthpi...
#9 of 110 The Greatest Keytarists of All Time 45.4k VOTES Who are the world’s greatest keytarists? Playing an instrument that isn’t as common as one like the piano, guitar, drums, or...
#5 of 47 The Best Organists in Rock and Jazz Today 2k VOTES Similar to the harpsichord and piano, but more grand and beautiful, the organ can create a louder, richer sound with a deep ...
#5 of 195 The Best Jazz Fusion Bands/Artists 14.1k VOTES This jazz fusion bands list ranks the best jazz fusion musicians ever by votes. This list of good jazz fusion artists and gr...
#33 of 102 The Best Musical Artists From Illinois 5.4k VOTES Here are the best artists and bands from Illinois. Illinois has a vast musical heritage, and much of it centers around Chica...
#13 of 90 The Best Jazz Composers of All Time 2.8k VOTES These are the greatest Jazz composers ranked from best to worst by Jazz fans all over the globe. Much like Jazz itself, the ...
Every Band & Musician Who Has Performed on Saturday Night Live 104.7k VIEWS Live from the main stage at 30 Rockefeller Plaza, this is a list of every band, musician, and singer who has performed on Sa...
26 Celebrities Who Were Class President 27.3k VIEWS The role of class president is important at any school, and the celebrities on this list have all held the office at some po...
#22 of 154 The Best Hard Bop Bands 822 VOTES Hard bop artists list, with photos, ranked best to worst by votes. List of good hard bop bands includes a filter so you can ...
#73 of 184 The Best Musicians Who Performed on SNL In The '80s 930 VOTES Saturday Night Live started the 1980s rough, but rode the decade through and celebrated its 15th anniversary in before the '...

Herbie Hancock is also found on...