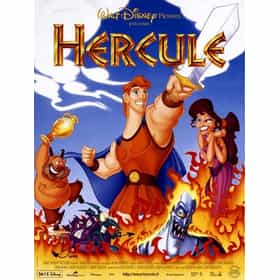 Hercules is a 1997 American animated musical fantasy film produced by Walt Disney Feature Animation and released by Walt Disney Pictures. The 35th animated feature in the Walt Disney Animated Classics series, the film was directed by Ron Clements and John Musker. The film is loosely based on the legendary Greek mythology hero Heracles, the son of Zeus, in Greek mythology. Though Hercules did not match the financial success of Disney's early-1990s releases, the film received positive reviews, and earned $252.7 million in box office revenue worldwide. Hercules was later followed by the direct-to-video prequel Hercules: Zero to Hero, which served as the pilot to Hercules: The Animated ... more on Wikipedia

12 Reasons Why Disney's 'Hercules' Is Just A Superman Movie In Disguise 2.7k views The parallels between Hercules and Superman are obvious. Both are super-powered idols from the heavens who perform incredibl...

Hercules is ranked on...

Hercules is also found on...