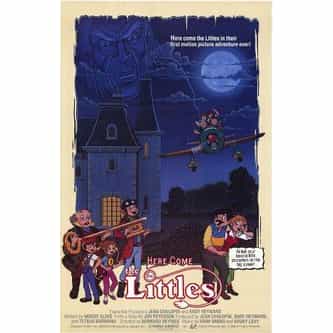 Here Come the Littles is a 1985 children's animated feature film, produced in Luxembourg by DIC Entertainment and distributed by Atlantic Releasing. It was directed by Bernard Deyriès and adapted by Heywood Kling from John Peterson's series of books, The Littles, and also based on the ABC television show of the same name. Here Come the Littles follows a boy named Henry Bigg as he meets a family of miniature people that lives in his home. While his uncle Augustus plans to build a ... more on Wikipedia

Here Come the Littles IS LISTED ON

#226 of 238
15.3k VOTES The Best G-Rated Children's Movies
List of All Animation Movies List of Films Scored By Haim Saban List of All Movies Released in 1985