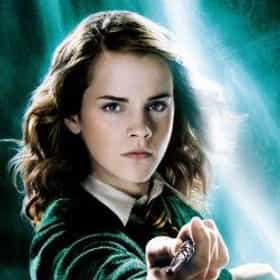 Hermione Jean Granger is a fictional character in J.K. Rowling's Harry Potter series. She initially appears in the first novel, Harry Potter and the Philosopher's Stone, as a new student on her way to Hogwarts. After Harry and Ron save her from a mountain troll in the girls' toilets, she becomes close friends with them and often uses her quick wit, deft recall, and encyclopaedic knowledge to help them. Rowling has stated that Hermione resembles her at a younger age, with her insecurity and fear of failure. ... more on Wikipedia

Hermione Granger is ranked on...

#1 of 287 The Best Female Characters in Literature 172.4k VOTES Some of the best characters in literature are female. From the evil to the undeniably perfect, these are the greatest female...
#2 of 71 The Best Fictional Witches 53.7k VOTES Witches in fiction are fascinating. On the large and small screen, across the pages of our favorite books, witch characters ...
#8 of 21 Every Patronus In 'Harry Potter,' Ranked By How Much You Wish It Was Yours 7.9k VOTES After sorting out how you feel about which Hogwarts house you're in and waving hello to whatever wand chooses you, cong...
#52 of 3,785 People who voted for Hermione Granger... People under 30 are 2x more likely to vote for this People in the South are 2x more likely to vote for this The Best Movie Characters of All Time 1M VOTES List of the best movie characters of all time, ranked by film buffs and people like you. This list includes performances by ...
#3 of 114 The Greatest Harry Potter Characters, Ranked 270k VOTES The top Harry Potter characters come from a rich universe crafted on the page and adapted to the screen, giving us some of t...
#5 of 390 People who voted for Hermione Granger... People under 30 are 2x more likely to vote for this The Greatest Female Characters in Film History 213.2k VOTES List of the best female movie characters of all time, whether young or old. This list includes the best female movie charact...
#1 of 257 People who voted for Hermione Granger... also upvote X-Men Franchise on The Best Superhero Movies Ever Made also upvote Lord of the Rings Franchise on The Best Movies of All Time The Greatest Kid Characters in Film 155.1k VOTES List of the greatest kid characters in film. These onscreen children were the best movie personalities in the history of cin...
#6 of 88 The Most Memorable Film Sidekicks Ever 33.9k VOTES A list of the most memorable movie sidekicks of all time. The collection of colorful and unique characters in the list below...
#6 of 16 The Most Powerful Wizards In The ‘Harry Potter’ Franchise, Ranked 8.8k VOTES Throughout the Harry Potter films, fans are introduced to a wide array of powerful witches and wizards, some of whom&nb...
#2 of 17 The Most Memorable Nerds In Movie History 307 VOTES Nerd characters have been around as long as movies themselves, with the trope appearing at least as early as 1925 and contin...
#25 of 44 Fictional Characters You'd Leave Your Woman For 56.2k VOTES She’s the woman of your dreams and she just killed a dude with a bow and arrow. She’s totally not real but if you were facin...
#6 of 44 The Best Fictional Characters Who Time Travel 9.9k VOTES Time travel is an extremely interesting subject in fiction because it deals with a myriad of themes and issues. Traveling ...
#9 of 34 The Best Members of Gryffindor 2.4k VOTES Who is the best and bravest Gryffindor from the Harry Potter franchise? There may be differences between the Harry Potter bo...
#2 of 104 Fictional Sidekicks You'd Most Want as a Best Friend 54k VOTES This is a votable list of fictional sidekicks you’d most want as a best friend. We’ve picked some of the best sidekicks fr...
#36 of 51 Funny Names to Give a Hamster 27k VOTES If you need some hamster name ideas, this is the place to be. Did you just get a snuggly, cuddly, fat-cheeked hamster of you...
#10 of 77 The All-Time Best Tween Movie Characters 1.5k VOTES The term ‘tween’ is often used to describe kids between nine and 12 years old. Tween characters are often overlooked in pop ...
#1 of 28 The Best First Roles Played by Your Favorite Actresses 5k VOTES Do you remember your first job? Chances are it wasn’t glamorous, and it didn’t pay well. It’s hard to believe that the big m...
#9 of 41 The Best Fictional Characters Who Never Give Up 7.2k VOTES Perseverance is one of the most admirable traits a person can have and it’s quite common in fiction to have a protagonist ...
#1 of 15 The Toughest Token Girls In Pack-Of-Boys Movies And TV Shows 939 VOTES Token females in kid friend gangs have been a popular trope in movies and TV for ages. These loner girls join&nbsp...
#1 of 38 The Most Beloved Fictional Bookworms 4.8k VOTES For many people, books are the perfect means of escape from the everyday world. Whether you’re trying to live a fantastica...
#3 of 37 The Greatest Bangs in Movie History 10.7k VOTES Bangs. Fringe. Whatever you call it, that hair that hangs down over your forehead can be real hit or miss. People either lov...
#11 of 62 The Best and Strongest Women Characters 23.7k VOTES Looking for more strong women characters in your life? This list of awesome women in literature, TV, and film has all kinds....
The Cast of Harry Potter: Where Are They Now? 5M VIEWS When J.K. Rowling’s wildly-popular and bestselling Harry Potter book series was adapted for the screen, fans finally got to ...
Which Harry Potter Character Are You, According To Your Zodiac Sign? 280.7k VIEWS J.K. Rowling's Wizarding World is a fascinating place full of characters we love and loathe, and it begs the ...

Hermione Granger is also found on...