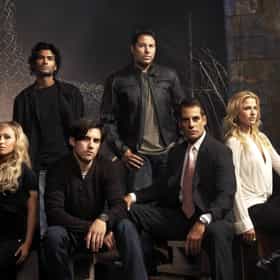 Heroes is an American science fiction television drama series created by Tim Kring that appeared on NBC for four seasons from September 25, 2006 through February 8, 2010. The series tells the stories of ordinary people who discover superhuman abilities, and how these abilities take effect in the characters' lives. The series emulates the aesthetic style and storytelling of American comic books, using multi-episode story arcs that build upon a larger, more encompassing narrative. The series was produced by Tailwind Productions in association with Universal Media Studios. It was filmed primarily in Los Angeles, California. Four complete seasons aired, ending on February 8, 2010. The ... more on Wikipedia

Veronica Mars
15 Real Life Soldiers That Put Captain America To Shame 7.9k votes Captain America is an American icon. He’s punched out Hitler and led our boys to victory an uncountable amount of times. Unf...
The Worst Superhero Performances on Film 108.6k votes List of the worst superhero performances on film. Here are the ranked actors and characters that made the worst superhero mo...
The Cast Of 'Heroes': Where Are They Now? 4k views When NBC's Heroes hit television screens back in 2006, it presented an innovative concept that feels all too commonplace in ...
The Best Songs About Heroes 3.4k votes Who doesn't need a hero to save them every once in a while? This list ranks the best songs about heroes, and includes music ...
13 Anime Heroes Who Almost Always Lose 8.7k votes Just because a character technically falls on the side of good does not mean good fortune always follows them. In fact, hero...
The Best Superhero Catchphrases in Comics 12.8k votes Taglines, slogans, catchphrases. Whatever you want to call them, they're important. Be it a noble battle cry like "Impe...
The Greatest Zombie Slayers in Movies 6.5k votes This is a list of the greatest zombie slayers of all time. In movies, the best zombie killers have been depicted in all vari...
The Best Seasons of Heroes 248 votes List of the best seasons of Heroes, listed from best to worst with DVD coer pictures when available. Television fans from ar...

Heroes is ranked on...

Heroes is also found on...