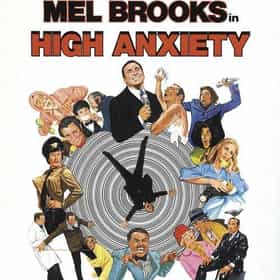 High Anxiety is a 1977 comedy film produced and directed by Mel Brooks, who also plays the lead. This is Brooks' first film as a producer and first speaking lead role. Veteran Brooks ensemble members Harvey Korman, Cloris Leachman and Madeline Kahn are also featured. The film is a parody of suspense films, most obviously the films directed by Alfred Hitchcock: Spellbound, Vertigo and The Birds. The movie was dedicated to Hitchcock, who worked with Brooks on the screenplay and later sent Brooks a case containing six magnums of 1961 Château Haut-Brion wine to show his appreciation. ... more on Wikipedia

High Anxiety is ranked on...

High Anxiety is also found on...