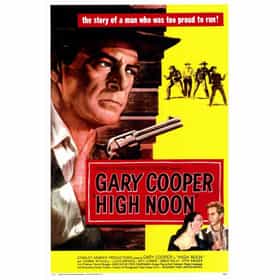 High Noon is a 1952 American Western film directed by Fred Zinnemann and starring Gary Cooper. In nearly real time, the film tells the story of a town marshal forced to face a gang of killers by himself. The screenplay was written by Carl Foreman. The film won four Academy Awards and four Golden Globe Awards. The award-winning score was written by Russian-born composer Dimitri Tiomkin. In 1989, High Noon was selected for preservation in the United States National Film Registry by the Library of Congress as being "culturally, historically, or aesthetically significant", entering the registry during the NFR's first year of existence. ... more on Wikipedia

The Best High Noon Movie Quotes 25 votes The best High Noon quotes make you realize how great the movie really is, even if you haven't seen it in a while. Let's rank...

High Noon is ranked on...

High Noon is also found on...