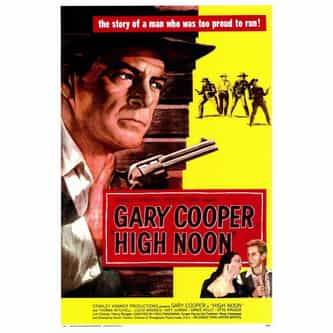 Tagline
There Is Nothing Under The Sun Like The High Adventure Of "High Noon"!
The story of a man who was too proud to run.
When these hands point straight up...the excitement starts!

Sequel
High Noon
Part II: The Return of Will Kane

High Noon is a 1952 American Western film directed by Fred Zinnemann and starring Gary Cooper. In nearly real time, the film tells the story of a town marshal forced to face a gang of killers by himself. The screenplay was written by Carl Foreman. The film won four Academy Awards and four Golden Globe Awards. The award-winning score was written by Russian-born composer Dimitri Tiomkin. In 1989, High Noon was selected for preservation in the United States National Film Registry by the ... more on Wikipedia

High Noon IS LISTED ON