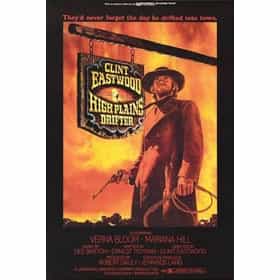 High Plains Drifter is a 1973 American film directed by and starring Clint Eastwood, written by Ernest Tidyman, and produced by Robert Daley for The Malpaso Company and Universal Studios. Eastwood plays a laconic and enigmatic figure, who metes out justice in a frontier mining town where he arrives as a stranger. The film was influenced by the work of Eastwood's two major collaborators, film directors Sergio Leone and Don Siegel. The film was shot on location on the shores of Mono Lake, California. Dee Barton provided the eerie film score. ... more on Wikipedia

High Plains Drifter is ranked on...