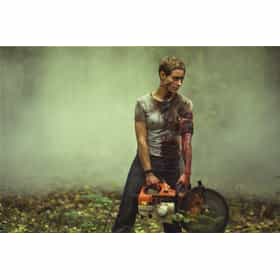 High Tension is a 2003 French psychological suspense and slasher film that was later released in 2004 in the UK and 2005 in the US and Canada. The film, directed by Alexandre Aja, stars Cécile de France, Maïwenn, and Philippe Nahon. High Tension was picked up by independent distributor Lions Gate Entertainment following a successful screening at the Midnight Madness section of the 2003 Toronto International Film Festival. ... more on Wikipedia

High Tension is ranked on...

#14 of 15 Pretty Good Horror Movies Where One Of The 'Victims' Is The Villain 11k VOTES Twist endings have been a staple of horror movies since the genre began, blowing audiences' minds after a tense rollerc...
#49 of 137 People who voted for High Tension... are 4x more likely to vote for Hellraiser Franchise on this list The Goriest Movies Ever Made 272.6k VOTES Are you a fan of gory movies? If so, you’ve come to the perfect place to find a new favorite gory movie. Go ahead and browse...
#2 of 10 Movie Twist Endings That Made No Sense Whatsoever 4.7k VOTES Twist endings in movies may shock the audience or pull the plot in new directions, but that doesn’t mean twist end...
#17 of 23 23 Super Awesome Horror Movies On Hulu You Can Watch Right Now 1.2k VOTES The full moon is peaking from behind a cloud, a raven caws in the night, and you’ve spoken the wretched spell/logged into Hu...
#73 of 118 The Best Horror Movies of the 21st Century 26k VOTES A list of the Best Horror Movies of the 21st Century. Looking for some recently-made horror movies to enjoy? This list provi...
#284 of 505 The Scariest Movies Ever Made 549.3k VOTES These are the all-time scariest movies ever made. Many of these movies have become part of the pop culture lexicon due to th...
#15 of 38 The Best Road-Horror Movies 3.5k VOTES A list of all the best road-horror movies ever made, many of which are streaming on Netflix and Amazon Prime. Check to see w...
#128 of 174 The Best Lions Gate Entertainment Movies List 2.9k VOTES List of Lions Gate Entertainment movies, ranked best to worst, including trailers, genres, and release dates. Lions Gate Ent...
#10 of 24 The Best 2000s Slasher Movies 737 VOTES In the 2000s slasher movies not only saw remakes of two classics, Halloween and Texas Chainsaw Massacre, but also a mat...
#2 of 80 The Best Horror Movies of 2003 1.1k VOTES List of the best 2003 horror movies, ranked by how many upvotes they've received by other fans of the genre. All types of sc...

High Tension is also found on...