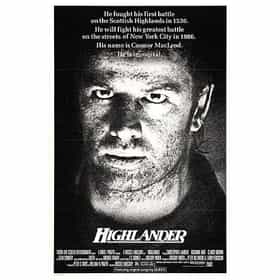 Highlander is a 1986 British-American cult fantasy film directed by Russell Mulcahy and based on a story by Gregory Widen. It stars Christopher Lambert, Sean Connery, Clancy Brown, and Roxanne Hart. The film depicts the climax of an ages-old battle between immortal warriors, depicted through interwoven past and present day storylines. Despite having enjoyed little success in its initial U.S. release, the cult film launched Lambert to stardom and inspired a franchise that included film sequels and television spin-offs. The film's tagline, "There can be only one", has carried on throughout the franchise, as have the songs provided for the film by Queen. ... more on Wikipedia

Highlander is ranked on...

Highlander is also found on...