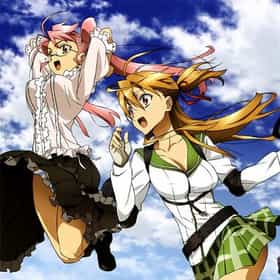 This series is a Japanese manga series written by Daisuke Satō and illustrated by Shōji Satō. The story follows a group of high school students caught in the middle of a zombie apocalypse. The series has been serialized in Fujimi Shobo's Monthly Dragon Age since September 2006 and as of March 2013, the series is on hiatus. The first tankōbon volume was released by Kadokawa Shoten on March 1, 2007, with a total of seven volumes available in Japan as of April 25, 2011. ... more on Wikipedia

lists about Highschool of the Dead

Highschool of the Dead is ranked on...

#41 of 891 The Best Anime Series of All Time 5.7M VOTES You love anime but what tops this list of the best anime series ever made? Top anime series include shows like Death Note, A...
#25 of 318 The Best English Dubbed Anime of All Time 969k VOTES If you're one of those people who only watches anime in Japanese, we don't blame you. English dubs can really ruin a series ...
#96 of 306 The 100+ Best Anime Intros of All Time 340.6k VOTES Awesome anime intros are often just as important as the series themselves. All those visual cues help viewers remember where...
#44 of 190 The Best Action Anime of All Time 638.5k VOTES Action anime is hard to define, but if a show has car chases and epic battles, then it probably fits the genre's descri...
#45 of 76 The 25+ Best First Anime to Watch for New Fans 69.7k VOTES Do you remember your first anime? For this list we're ranking the best first anime to watch, with the help of your votes. Wh...
#13 of 69 The Top Horror Anime of All Time 223.7k VOTES There are plenty of scary movies and horror films for film lovers to choose from, but what about anime fans? Don't worry, th...
#25 of 209 The Best Grown-Up Anime of All Time 551k VOTES For those of you looking for anime that is a bit more mature, like seinen anime, here's a list of the best adult anime ...
#4 of 74 The Best Fan Service Anime of All-Time 148.7k VOTES If you've landed on this list of the best fan service anime, then we probably don't have to tell you what the definition of ...
#34 of 121 The 100+ Best Anime Streaming On Hulu 192.2k VOTES Here is the list of the best anime streaming on Hulu, as determined by anime fans like you. Hulu has quite an expansive coll...
#16 of 23 Anime Guaranteed To Make You Physically Nauseous 22.5k VOTES Anime isn't just harems and sports rivalries. Hidden amongst the cutesy fun stuff is lots of seriously gross anime. Whether ...
#3 of 39 The 25+ Best Ecchi Action Anime Ever Made 49.4k VOTES Since ecchi has so many sub genres, we present you with the best ecchi action anime of all time, ranked by fans like you. Wh...
#3 of 25 The Best Zombie Manga of All Time 8.9k VOTES It's one of the most popular genres of the last 10 years, so why wouldn't there be some good zombie manga floating around ou...
#27 of 45 The Best Psychological Thriller Anime of All Time 34k VOTES The best thriller anime all have one thing in common- they keep you on the edge of your seat at all times. From Death Note t...
#5 of 15 Anime You Wouldn't Be Able To Explain If Someone Walked In On You Watching 8.3k VOTES It's hardly a secret that anime is considered niche entertainment in the US. While some of the best anime series are clearly...
#65 of 76 The Best Anime To Watch While Working Out 1.8k VOTES Believe it or not, there are many of us who watch anime while we exercise! For that reason, let's take a look at some great ...
#12 of 103 The Best Madhouse Anime, Ranked 70.4k VOTES   The best Studio Madhouse anime films and shows always leave viewers wanting more. They have been producing anime fo...
#7 of 13 11 Great Anime That Deserve Live Action Movie Adaptations 5.4k VOTES With the Ghost in the Shell movie coming in 2017, it's time we looked at some other anime that deserve live action movie ada...
#6 of 41 The Best Post-Apocalyptic Anime of All Time 16.4k VOTES In each of these post-apocalyptic anime series on this list, the world has pretty much gone to hell. Since there are so many...
#13 of 27 The 25+ Best Anime With Only One Season 43.4k VOTES Some of the best anime can turn sour for refusing to end quietly. Thus, some studios have opted to release only one sea...
#8 of 79 The Best Harem Manga of All Time 17.5k VOTES If there's one type of character you should be jealous of, it's the main character of a harem manga. He's surrounded by beau...
#19 of 25 The 25+ Anime Superpowers You Want Most 44.2k VOTES If you have ever seen any of the best shonen anime, you have probably fantasized about wielding some crazy an...
#7 of 53 The Best Ecchi Manga of All Time 31.2k VOTES When it comes to manga, there's no doubt that the ecchi genre is extremely popular among readers. That being said, what is...
#1 of 13 The Best Zombie Anime of All Time 13k VOTES Turn off the lights and lock your doors, because this is a list of the best zombie anime of all time. There aren't many anim...
#10 of 33 The Best Zombie Related TV Series 260 VOTES These are the best zombie TV shows of all time, according to fans of the undead. There's something special about these shamb...
#8 of 26 The Best Anime Like Btooom! 458 VOTES Need some Btooom! anime recommendations? It's a shame that the anime was cut short and will likely never resume bu...
#5 of 102 The Best Harem Anime Of All Time 407.1k VOTES List of the best Harem anime, voted on by Ranker's anime community. If you're not familiar with the harem genre, it usually ...
#10 of 24 The Best Anime Like The Testament of Sister New Devil 2k VOTES Need some The Testament of Sister New Devil anime recommendations? Since it's such a great series, let's rank the ...
#2 of 20 The Best Anime Like 'Is This A Zombie?' 373 VOTES The anime Is This a Zombie? centers on Ayumu Aikawa, a zombie who battles demons called Megalos. For fans of Is This a ...
#7 of 18 The 16+ Best Survival Game Anime 22.6k VOTES List of the best survival game anime, voted on by Ranker's anime community. If you're looking for movies and shows like The ...