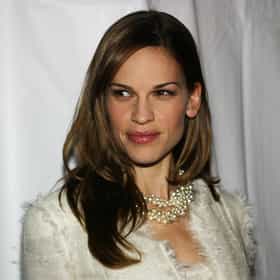 Hilary Ann Swank (born July 30, 1974) is an American actress and film producer. She is the recipient of numerous awards, including two Academy Awards and two Golden Globe Awards. Swank made her film debut with a minor role in Buffy the Vampire Slayer (1992), before receiving her breakthrough role in the fourth installment of The Karate Kid franchise, The Next Karate Kid (1994). On television, she starred as Carly Reynolds on the eighth season of the Fox teen drama Beverly Hills, 90210 (1997–1998). Swank received widespread critical acclaim for her portrayal of transgender man Brandon Teena in the biographical drama film Boys Don't Cry (1999), for which she received her first Academy ... more on Wikipedia

Hilary Swank Loves and Hookups 1.9k views Who is Hilary Swank dating? Many famous men have dated Hilary Swank, and this list will give you more details about these lu...
The Best Hilary Swank Movies 1k votes List of the best Hilary Swank movies, ranked best to worst with movie trailers when available. Hilary Swank's highest grossi...
What Happened To Hilary Swank? 6.5k views Of all the Oscar-winning performances of the past two decades, she gave not one, but two of the most brilliant; nowadays, sh...

Hilary Swank is ranked on...

Hilary Swank is also found on...