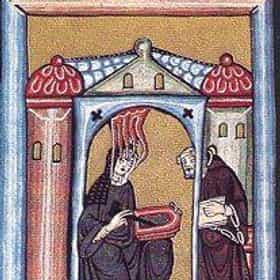 Hildegard of Bingen (German: Hildegard von Bingen; Latin: Hildegardis Bingensis; 1098 – 17 September 1179), also known as Saint Hildegard and the Sibyl of the Rhine, was a German Benedictine abbess, writer, composer, philosopher, Christian mystic, visionary, and polymath. She has been considered by many in Europe to be the founder of scientific natural history in Germany.Hildegard's fellow nuns elected her as magistra in 1136; she founded the monasteries of Rupertsberg in 1150 and Eibingen in 1165. One of her works as a composer, the Ordo Virtutum, is an early example of liturgical drama and arguably the oldest surviving morality play. She wrote theological, botanical, and medicinal ... more on Wikipedia

Hildegard of Bingen is ranked on...

#568 of 2,175 The Greatest Musical Artists of All Time 13.4M VOTES When VH1 polled fellow artists to name the greatest artists of all time, it seemed like a good idea---but in reality, the li...
#74 of 108 The Best Catholic Authors 4k VOTES Some of history’s most influential and recognizable literary works were written by famous Catholic authors. Who hasn’t heard...
#2 of 25 The Best Medieval Composers, Ranked 1.4k VOTES Medieval music is, to this day, widely considered some of the most influential of all time, and these are the greatest Medie...
#4 of 54 The Best Female Composers Ever, Ranked 2.4k VOTES These are the greatest female composers, ranked from best to worst. From some of the more famous female composers on this li...
#141 of 153 Famous German Inventors List 2.3k VOTES List of famous German inventors, listed loosely by relevance with photos when available. These are some of the greatest Germ...

Hildegard of Bingen is also found on...