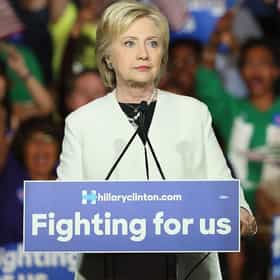 Hillary Diane Rodham Clinton (born Hillary Diane Rodham, October 26, 1947) is an American politician, diplomat, lawyer, writer and public speaker. She was First Lady of the United States from 1993 to 2001, a United States senator from New York from 2001 to 2009 and the 67th United States secretary of state from 2009 until 2013. Clinton became the first woman to be nominated for President of the United States by a major political party when she won the Democratic Party nomination in 2016. Raised in the Chicago suburb of Park Ridge, Clinton graduated from Wellesley College in 1969 and earned a Juris Doctor from Yale Law School in 1973. After serving as a congressional legal counsel, she ... more on Wikipedia

What Will You Do If Hillary Clinton Wins? 1.5k votes The 2016 presidential election is one of the most important milestones in America’s short history. All elections are meaning...
26 Things You Might Not Know About Hillary Rodham Clinton 100.2k views Few public figures are as divisive as New York Senator, US Secretary of State, First Lady, and 2016 presidential candidate H...
Dream Running Mates Hillary Should Consider 1.6k votes Hillary Rodham Clinton is running for president yet again. But who will she pick? This list of dream running mates for the C...
The Top Reasons Why Millennial Women Are Voting For Hillary 897 votes "I'm with her" has become a rally cry for Clinton supporters, and Beyonce's song, "Run the World? (Girls)&quo...

Hillary Clinton is ranked on...

Hillary Clinton is also found on...