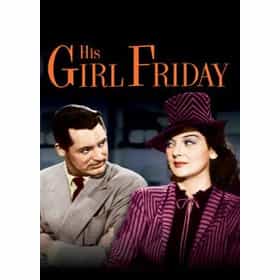 His Girl Friday is a 1940 American screwball comedy film directed by Howard Hawks, from an adaptation by Charles Lederer, Ben Hecht and Charles MacArthur of the play The Front Page by Hecht and MacArthur. The major change in this version, introduced by Hawks, is that the role of Hildy Johnson is a woman. The film stars Cary Grant as Walter Burns and Rosalind Russell as Hildy Johnson and features Ralph Bellamy as Bruce Baldwin. The film was #19 on American Film Institute's 100 Years...100 Laughs and has been selected for preservation in the United States National Film Registry. Due to a failure to renew the copyright registration, the film entered the public domain in 1968; the 1928 ... more on Wikipedia

His Girl Friday is ranked on...

His Girl Friday is also found on...