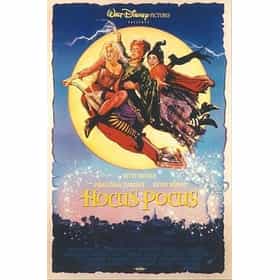 Hocus Pocus is a 1993 American comedy fantasy film directed by Kenny Ortega and starring Bette Midler, Sarah Jessica Parker, and Kathy Najimy as a trio of witches, the Sanderson Sisters, who are inadvertently resurrected by a cynical teenager, his younger sister, and his crush in the small town of Salem, Massachusetts. Despite receiving negative reviews from critics during its theatrical release, the film has since received a cult following and has proved to be a popular Halloween-themed film. ... more on Wikipedia

What Happened To The Cast Of Hocus Pocus? 886.5k views It's hard to believe, but when it was first released in 1993, Hocus Pocus was neither a critical nor box office success. It ...

Hocus Pocus is ranked on...

Hocus Pocus is also found on...