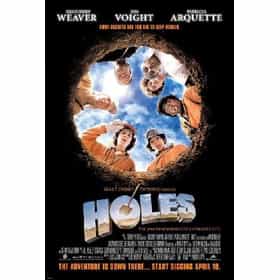 Holes is a 2003 American comedy-drama adventure film based on the 1998 novel of the same title by Louis Sachar, with Shia LaBeouf as the lead role of Stanley Yelnats IV and also starring Khleo Thomas, Sigourney Weaver, Jon Voight, Tim Blake Nelson, Eartha Kitt, Patricia Arquette, Dulé Hill, Rick Fox, and Henry Winkler. The film was produced by Walden Media and distributed in many markets by Disney's distribution company Buena Vista. Holes was Scott Plank's final film; he passed on October 24, 2002. ... more on Wikipedia

What Happened To Everyone In The ‘Holes’ Cast? 36.2k views Holes is one of those smart, snappy, satisfying children's movies that sticks with you long after the credits have rolled. T...
The Desert Hellscape Of 'Holes' Really Represents Purgatory 1.8k views In 2003, Disney released one of the greatest family mystery movies ever, Holes. Based on Louis Sachar’s book of the same nam...

Holes is ranked on...

Holes is also found on...