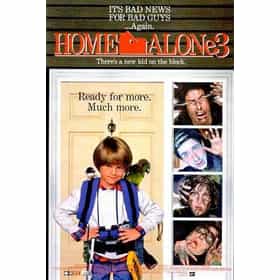 Home Alone 3 is a 1997 American family comedy film written and produced by John Hughes. It is the third film in the Home Alone series and the first not to feature actor Macaulay Culkin, director Chris Columbus, and composer John Williams. The film is directed by Raja Gosnell, who served as the editor of both original films and stars Alex D. Linz as Alex Pruitt, a resourceful boy who is left home alone and has to defend his home. The film was followed by a made-for-television sequel, Home Alone 4: Taking Back the House, in 2002. ... more on Wikipedia

#404 of 493 The Funniest '90s Movies 305.6k VOTES List of the funniest 90s movies. The best comedies of the 1990s make up the titles on this ranking page. Nineties nostalgia ...
#590 of 1,199 The Absolute Funniest Movies Of All Time 1M VOTES Looking for good comedy movies to watch? Here are the funniest movies of all time, ranked by fans. What are the top comedies...
#9 of 233 The Worst Sequels Of All Time 78.3k VOTES The worst movie sequels from throughout film history. These are the follow-up films in a franchise or reboots that brought t...
#177 of 318 The Best Movies for Kids 201.9k VOTES If you have kids, you know you are always on the lookout for a movie that they will love and that you can sit through withou...
#135 of 139 The Funniest Slapstick Movies Ever Made 13.7k VOTES A list of all the best slapstick movies ever made, many of which are streaming on Netflix and Amazon Prime. This slapstick m...
#33 of 52 The Best Scarlett Johansson Movies 19.3k VOTES This list of the best Scarlett Johansson movies is ranked best to worst and includes movie trailers when available. Througho...