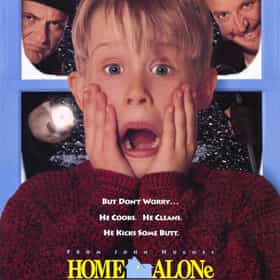 Home Alone is a 1990 American Christmas family comedy film written and produced by John Hughes and directed by Chris Columbus. The film stars Macaulay Culkin as Kevin McCallister, a boy who is mistakenly left behind when his family flies to Paris for their Christmas vacation. Kevin initially relishes being home alone, but soon has to contend with two would-be robbers played by Daniel Stern and Joe Pesci. The film also features Catherine O'Hara and John Heard as Kevin's parents. ... more on Wikipedia

Home Alone 2: Lost in New York
Who Should Star In A 'Home Alone' Remake Today? 1.9k votes In 1990, the comedy Home Alone became the third highest-grossing film of all time and the highest-grossing comedy ever. One ...
All The Traps In Home Alone and Home Alone 2, Ranked By Horrific Brutality 4.6k votes Everyone who saw the Home Alone films as a child fantasized about one day setting up their own variations of Kevin McCallist...
Joe Pesci Stories From Behind The Scenes Of ‘Home Alone’ 33.3k views For the better part of his career, Joe Pesci starred in movies that were strictly adult fare, and it wasn't until he took th...
The Story Behind ‘Angels With Filthy Souls,’ The Fake Black-And-White Movie Inside ‘Home Alone’ 4.2k views It’s now been decades since the initial release of Home Alone (1990) and Home Alone 2: Lost in New York (1992), but the film...
The Best Quotes From 'Home Alone' 223 votes These Home Alone quotes are perfect examples of just how funny and classic the movie really is. After his family accidentall...

Home Alone is ranked on...

Home Alone is also found on...