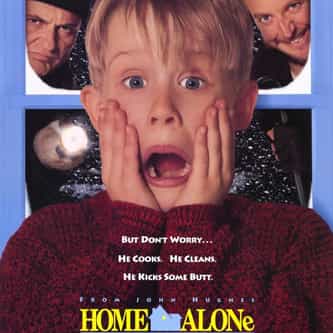 Tagline
A family comedy without the family.

Home Alone is a 1990 American Christmas family comedy film written and produced by John Hughes and directed by Chris Columbus. The film stars Macaulay Culkin as Kevin McCallister, a boy who is mistakenly left behind when his family flies to Paris for their Christmas vacation. Kevin initially relishes being home alone, but soon has to contend with two would-be robbers played by Daniel Stern and Joe Pesci. The film also features Catherine O'Hara and John Heard as Kevin's parents. ... more on Wikipedia

1.9k votes Who Should Star In A 'Home Alone' Remake Today?

4.7k votes All The Traps In Home Alone and Home Alone 2, Ranked By Horrific Brutality

43.5k readers Joe Pesci Stories From Behind The Scenes Of ‘Home Alone’

4.2k readers The Story Behind ‘Angels With Filthy Souls,’ The Fake Black-And-White Movie Inside ‘Home Alone’

Home Alone IS LISTED ON