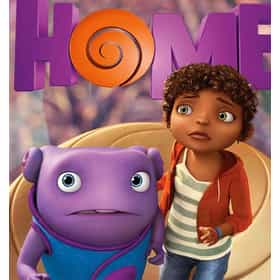 Home is a 2015 American 3D computer-animated buddy comedy film produced by DreamWorks Animation and distributed by 20th Century Fox. It is based on Adam Rex's 2007 children's book The True Meaning of Smekday and stars Jim Parsons, Rihanna, Jennifer Lopez, and Steve Martin. Tim Johnson is the director of the film, Chris Jenkins and Suzanne Buirgy are its producers, and the adaptation is by Tom J. Astle and Matt Ember. The story takes place on planet Earth, where an alien race called the Boov invade the planet. However, a teenage girl named Tip manages to avoid capture and goes on the run. The film was released in theaters on March 27, 2015. Home was promoted with the release of a ... more on Wikipedia

Home is ranked on...

#185 of 598 The Best Animated Films Ever 974.2k VOTES The best animated movies of all time are an assortment of animated movies that rank among the best movies ever made. Wh...
#16 of 63 The Best New Kids Movies of the Last Few Years 103.1k VOTES If you're looking for the best movies to watch with your kids, this list of new children's films is for you. Featuring the b...
#30 of 44 The Best DreamWorks Animation Movies 9.8k VOTES The best DreamWorks Animation movies are arguably on par with many of the top Disney/Pixar animated movies. And that doesn't...
#28 of 36 The 25+ Best Jennifer Lopez Movies of All Time, Ranked 10.6k VOTES These are the best Jennifer Lopez movies of all time, ranked best to worst by fans of her movies and music. This filmography...
#11 of 100 Movies Turning 5 In 2020 619 VOTES Let's take a short walk down memory lane to look back at the movies released in 2015. Believe it or not, they turn five...

Home is also found on...