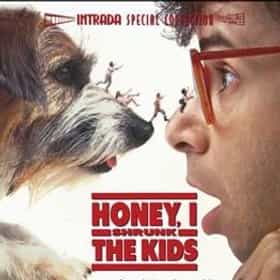 Honey, I Shrunk the Kids

Honey, I Shrunk the Kids is a 1989 soft science fiction-family film. The directorial debut of Joe Johnston and produced by Walt Disney Pictures, it tells the story of an inventor who accidentally shrinks his and his neighbor's kids to ¼ of an inch with his electromagnetic shrinking machine and throws them out into the backyard with the trash, where they must venture into their backyard to return home while fending off against insects and other obstacles. Rick Moranis stars as Wayne Szalinski, the inventor who accidentally shrinks his children, Amy and Nick. Marcia Strassman portrays his wife, Diane, to whom he delivers the titular line. Matt Frewer, Kristine Sutherland, Thomas ... more on Wikipedia

lists about Honey, I Shrunk the Kids

Honey, I Shrunk the Kids is ranked on...

#902 of 1,699 The Most Rewatchable Movies 3.4M VOTES There are some movies that I always stop at and watch if I see them on TV or I can put in the DVD player and watch when I'm ...
#88 of 112 The Very Best Movie Franchises 311.7k VOTES The best movie franchises of all time have brought us some of the best movies ever as well as some billion dollar films and ...
#11 of 257 The Best Movies for 10-Year-Old Kids 101.4k VOTES The films on this list of the best movies for 10 year olds have been ranked by the community as the best films for this age ...
#10 of 143 The Best Disney Live-Action Movies 123.4k VOTES What are the best Disney live action movies? While Disney has put out some of the most incredible, memorable animated featur...
#7 of 61 The Best Adventure Movies for Kids 6.9k VOTES List of best kids adventure movies. What are the top kids adventure movies? This is a list of the best kids adventure movies...
#13 of 99 The Greatest Kids Sci-Fi Movies 3.6k VOTES   Science fiction is a movie genre that has been embraced by young fans for decades. The best scifi movies for childr...
#10 of 23 Great Movies About Inventors & Innovators 355 VOTES The greatest innovators have not only reshaped the world with their inspired inventions, but they have also served as...
#7 of 15 Silly Movies That Would Be Better If Werner Herzog Narrated Them 146 VOTES Have you ever wondered what movies with voiceover would look and sound like without voiceover? How different would The Wolf ...
#162 of 566 The Greatest Sci-Fi Movies of All Time 563.6k VOTES What are the greatest sci-fi movies of all time? Science fiction films are among the most popular movies in cinematic h...
#48 of 200 The Very Best Children's Movies 70.6k VOTES Kid's movies list--all of the best films for children that were ever made, including classics like E.T. and more recent kid'...
#86 of 314 The Greatest Teen Movies of the 1980s 102.6k VOTES Few decades have made their mark on film quite like the 1980s did. The era of John Hughes and oh so many classic teen movies...
#136 of 588 The Best Fantasy Movies 907.7k VOTES A list of the best fantasy movies ever made. This fantasy film list can be sorted by cast, year, director and more. This lis...
#51 of 186 The Best Sci-Fi Movies of the 1980s 19.5k VOTES This 1980s sci-fi movies list includes some of the most beloved science fiction movies of all time, such as The Empire Strik...
#13 of 58 The Best Sci Fi Comedy Movies, Ranked 4.2k VOTES This list contains information on the best sci fi comedy movies, ranked from best to worst by user votes. The best sci fi co...
#12 of 40 The Best Movies About Nerds 5.1k VOTES Who doesn’t have a favorite nerd? And who doesn't have a favorite nerd movie? They either reminds us of a part of ourselves ...
#3 of 45 The Best Disney Science Fiction Movies Of All Time 510 VOTES It’s time to determine the best Walt Disney sci-fi movies. Space and far away galaxies are a great backdrop for epic stories...
#1 of 14 The Best Movies About Shrinking 513 VOTES A list of the best movies about shrinking ever made, ranked by film fans' votes. This list is ordered by popularity, so...
#4 of 20 Great '80s Movies Your Kids Will Love 973 VOTES It can be difficult to get your children to watch a movie that was released before they were born. It's natural to want to s...
#24 of 42 The Best Comedy Movies for 12 Year Old Kids 187 VOTES What comedy films can 12 year old kids watch? They have to be free of gratuitous adult situations and vulgar language, ...
#4 of 41 The Best Comedy Movies for 8 Year Old Kids 241 VOTES Is there any more joyful sound than a child’s laughter? This list of comedy movies for 8 year old kids is sure to make young...
#4 of 26 The Best Rick Moranis Movies 565 VOTES List of the best Rick Moranis movies, ranked best to worst with movie trailers when available. Rick Moranis's highest grossi...
#21 of 40 The Best Adventure Movies for 10 Year Old Kids 283 VOTES This list of appropriate adventure movies for 10 year old kids is a mix of animated and live-action films. It also includes ...

Honey, I Shrunk the Kids is also found on...