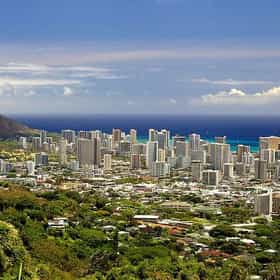 Honolulu is the state capital and the most populous city in the U.S. state of Hawaii. It is the county seat of the City and County of Honolulu. Hawaii is a major tourist destination and Honolulu, situated on the island of Oahu, is the main gateway to Hawaii and a major gateway into the United States. The city is also a major hub for international business, military defense, as well as famously being host to a diverse variety of east-west and Pacific culture, cuisine, and traditions. Honolulu is both the westernmost and the southernmost major American city. For statistical purposes, the U.S. Census Bureau recognizes the approximate area commonly referred to as "City of ... more on Wikipedia

Honolulu is ranked on...

Honolulu is also found on...

top global brands, prisons in kentucky, top zoos in us, best museum cities in the us, efteling roller coasters, airlines that fly out of denver, meilleur anime du moment, must do in la, scott baio girlfriends list, Art Punk Bands