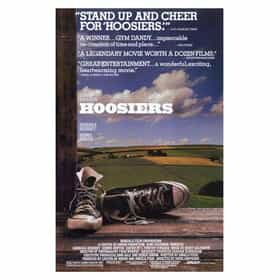 Hoosiers is a 1986 sports film written by Angelo Pizzo and directed by David Anspaugh. It tells the story of a small-town Indiana high school basketball team that wins the state championship. It is loosely based on the Milan High School team that won the 1954 state championship. Gene Hackman stars as Norman Dale, a new coach with a spotty past. The film co-stars Barbara Hershey and Dennis Hopper, whose role as the basketball-loving town drunk earned him an Oscar nomination. Jerry Goldsmith was also nominated for an Academy Award for his score. ... more on Wikipedia

Hoosiers is ranked on...

Hoosiers is also found on...