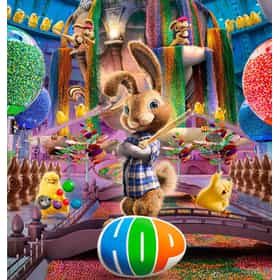 Hop is a 2011 3D live-action/computer-animated fantasy comedy film directed by Tim Hill and staring Russell Brand, Hugh Laurie, and James Marsden. On Easter Island, an optimistic young talking rabbit named E.B. is intended to succeed his father as the Easter Bunny. Intimidated by the calling's demands and ignoring his father's orders, E.B. runs away to Hollywood to pursue his dream of becoming a drummer. His father sends his royal guards, the Pink Berets, to search for him and bring him back. Meanwhile, E.B.'s father's second-in-command Carlos the Chick plots a coup d'état against him to take over Easter. ... more on Wikipedia